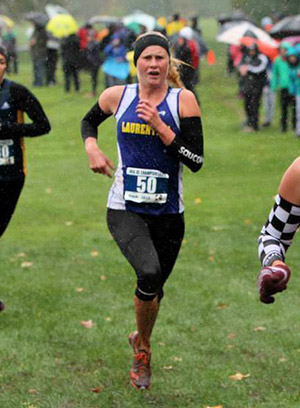 The Laurentian women’s cross-country running team competed at the OUA championships on Saturday, placing 7th out of 15 teams. Running in heavy rain and winds on Hamilton’s Chedoke Golf Course, the Voyageurs scored 229 points.

Rookie Emily Marcolini, still healing from an injury, was held out of the race.

Laurentian’s score was identical to Waterloo’s, but OUA regulations break ties by counting back to the 6th place finisher on the tied teams. Laurentian’s 6th place, Alyssa Bedard, finished 58th, while Waterloos’ 6th was 81st.

“It was a rough day for us,”  said head coach, Dick Moss. “The team didn’t race well in the muddy conditions, and, while we had some excellent individual performances, some of our runners would like to have a do-over on that race. Fortunately, they’ll get their wish in two weeks at the CIS championships.”

Laurentian competes in their final race of the year at the CIS Championships in London on November 9th.